In the same year Tony Blair came to power, Gary Oakley started on the next stage of his career within the plastics industry. PM’s come and go but Gary has stayed at Wrights Plastics and his 25 years long service has been recognised by the West Bromwich-based plastic forming specialist.

His time at Wrights Plastics has seen him move from tool maker to Technical Manager where his unrivalled knowledge of processes and materials sees him develop and design a huge range of plastic parts, components, and products for clients in sectors such as automotive, medical, retail and industrial.

It has also become a family-affair as his son Liam also works at the company. 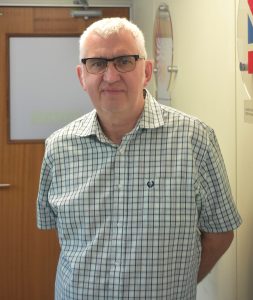 Grease was the word

His current role is a far cry from his start in the industry which saw him washing off grease! At the end of his YOP scheme (younger readers please ask their grandparents) in 1984, a fresh-faced Gary applied for a job at Phipps Plastics.

Gary picks up the story “Grease was used as part of the forming process for the acrylic food covers the company made – it helped improve their clarity. As the new boy it was my job to clean down the formings and get rid of the grease!”

But even at interview Gary had shown an interest in the manufacturing processes which saw him quickly develop new skills and build his career which included  moving to Bristol to help set up a new production centre. But Tipton born & bred Gary was soon back in the Midlands where he has remained ever since.

His time at Wrights has seen the company weather pandemic, recessions and fire and Gary reflects that one of the strangest events in his career was when he left Acrylics Plus to join Wrights Plastics. “I said my goodbye to my boss Bill Porter at Acrylics Plus but shortly afterwards Wrights bought out the company. Bill and I were at the same company again but this time as co-workers. It took a while to get used to!”

In recent years Wrights Plastics has also been a family affair as Gary’s son Liam also works at the company. “It was probably inevitable. Liam began working evening shifts on the shopfloor while he was still at school! He now works on the production side too. We’ve got a joint interest in engineering but we try to keep shoptalk to as little as possible.

“Wrights is a family-owned business with the third generation involved in the running the company so family is important to the business.

Looking back on 25 years at Wrights Plastics it is inevitably the technological changes that come to mind, “Take laser cutting for example. It used to take days to cut 1000s of components which now can be done in 24hrs.

“Wrights have always been keen on investment in cutting-edge technology. We purchased one of the first 5 axis CNC routing machines and our expertise at making the most of its applications has helped us grow our service offering. The company has used new tech to develop its reputation for excellence. We often had to learn new skills pretty quickly, but I’ve always enjoyed the challenges new tech brings.”

Gary is one of eight members of the Wrights Plastics team who have been with them for 25 years or more – with more to come this year.

MD Mike Wright said “I always feel honoured that anyone would spend a quarter of a century with us. With Gary that time has flown by, and he has always stepped up to new challenges and new roles with real enthusiasm. His outstanding knowledge of processes and materials has helped us grow the company and develop a reputation for innovative solutions that clients’ have found invaluable.”