What is plastic forming? 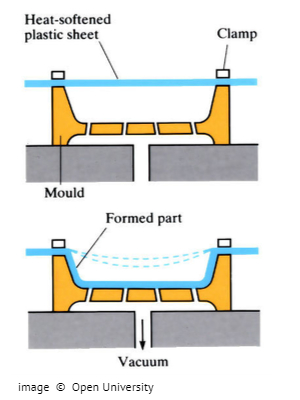 Plastic forming is the manipulation of plastic to create products, components or parts for larger projects through the application of heat. Techniques include the use of gravity, vacuums, compression and centripetal force.

Plastic comes in a large variety of forms, each with their own formability qualities and finished strengths. The plastic forming process used will depend upon the finished product required, the quantity needed and the budget available.

The use of plastic in the manufacturing of parts and components is wide spread across the industrialised world and there are lots of different techniques used to achieve a cost-effective result. We look briefly at the most popular.

Thermoforming is one of the oldest and most common methods of processing plastic materials. The process involves heating a plastic sheet until soft and then draping it over a mould. A vacuum is applied sucking the sheet into the mould. The sheet is then ejected from the mould. In its advanced form, the vacuum forming process utilises sophisticated pneumatic, hydraulic and heat controls thus enabling higher production speeds and more detailed vacuum formed applications.

Drape moulding or forming is a process whereby a plastic sheet is heated to the state where it can be draped (pressed, bent or formed) into or over a mandrel, form or tool and sometimes using both an inside and outside form creates the desired shape without the use of vacuum. It is heated inside an ‘oven’ and is ideal for larger forms.

Plastic granules are poured into a mould and spins in two different directions simultaneously while heat is applied.  The plastic is forced outward to create a hollow moulded piece.  Once the mould is cooled, the piece is removed from the mould.

Material is introduced into the injection moulding machine via a Hopper.  The injection moulding machine consists of a heated barrel equipped with a reciprocating screw (driven by a hydraulic or electric motor), which feeds the molten polymer into a temperature controlled split mould via a channel system of gates and runners. The screw melts the polymer, and also acts as a ram during the injection phase. The screw action also provides additional heating by virtue of the shearing action on the polymer. The polymer is injected into a mould tool that defines the shape of the moulded part.

In injection blow moulding a molten polymer is fed into a manifold where it is injected through nozzles into a hollow, heated preform mould. The preform mould forms the external shape and is clamped around a mandrel (the core rod) which forms the internal shape of the preform. The preform consists of a fully formed bottle/jar neck with a thick tube of polymer attached, which will form the body. In extrusion blow moulding a preform mould opens and the core rod is rotated and clamped into the hollow, chilled blow mould. The core rod opens and allows compressed air into the preform, which inflates it to the finished article shape.

Thanks to the British Plastics Federation for their help with definitions